OLD .58. PATHOGEN “Forged In The Crucible Of Death” 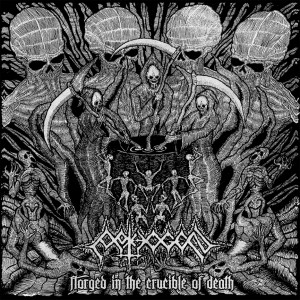 Death metal tyrants from Pathogen back with third sacrilege. The new album is an uncompromising, dirty, dark Death Metal forged in the deepest depths of the abyss! Immerse yourself in eight pieces burning your soul and flogging body. “Forged In The Crucible Of Death” is a tribute to the old, true, sordid, rotten music unconstrained by fashion and posturing. Pathogen stands in opposition to most of the garbage witch dirty underground scene. The album contains re-recorded song from the first demo “Lord Of The Undead”. This is your one-way ticket to hell. Get it before you die! Dark graphics by Joel “Necronos” Santiago. Layout – Perversor. Album released in a standard case. CD with graphics embossing. All copies are hand numbered.