OLD .81. HATE THEM ALL “Last Feast With The Beast” 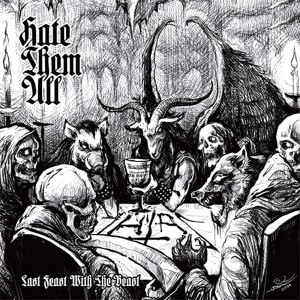 After years of rotting in the basement, spitting rehs , demos and splits HATE THEM ALL recorded the full album . Twelve shots aimed straight in the face all those who thought they knew what the fucking underground metal is. “Last Feast With The Beast” is an uncompromising mix of black /death / thrash , which is a tribute to the eternal gods of metal. Rough, raw , dirty sound . Tar mixing blasphemy with obsession . 34 minute devils , honest , old-school underground metal. The album released in a standard case in cooperation with Bestial Invasion Records and Moon Records.