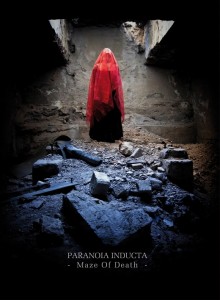 Paranoia Inducta – Maze of Death – this is the latest album of well known and valued for many years musical project. This is the continuation of the former album “Evil Angel” which gained great acceptance of listeners and reviewers. The “Maze of Death” is a very concept album which could be described in just three words: loneliness, fear and death ! The title – maze of death determines a metaphor of human life which is wandered in completely loneliness, blindfolded in completely darkness. We explore a lot of empty and blind underpasses which were often just an illusion and even hope for many of us. But the truth is that they turned out to be just an illusion which does not lead anywhere and the only outgoing is just death! This album contains over 50 minutes of cold and dark music. It is absolutely perfectly edited, painted digipack, size A-5, decorated with unique pictures of one of a kind AMELIA ! Maze of Death is released in cooperation, by two national /Polish/ labels: Old Temple and Doomsday Factory. Abandon all hope, ye who enter here.