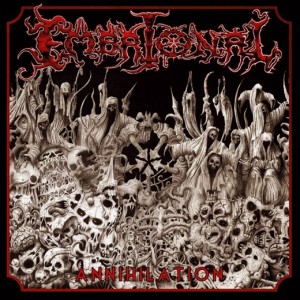 The long-awaited re-release of their second demo in 2007 Embrional murderers. This material showed the way that horde became at a later debut album. Six brutal blows from demo remained in its original version. Music without unnecessary treatment, mix or anything that would destroy the original recordings aggression. Additionally, at CD has been added a full concert from the “Rude Boy” club in Bielsko-Biala from 07.04.2013. The concert was recorded and executed professionally what allows us to experience of this concert. Over 50 minutes of death metal for of old school fans. All are fasten together by Mariusz Krajewski great graphics and graphic design in old atmosphere prepared by Perversor.