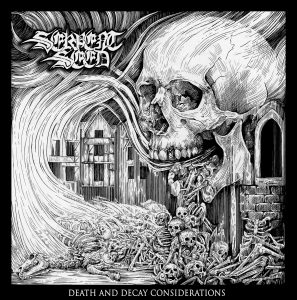 After five years the band is coming back with their second album „Death And Decay Considerations” which continues the path of Death/Black metal. Forty-six minutes of hard, brutal playing and full of dark climate at the same time. As the title of the album suggests the lyrics deal with death and decay, sinister forces of nature represented by destructive forces of the elements and wreaking havoc plague as well as anti-religious themes. The pieces are filled with misanthropic attitude, dripping with hostile energies referring to the darkest occultistic traditions. Album is released in standard jewel case on golden CD.