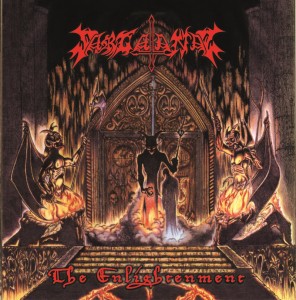 Re-edition of underground metal from Mexico canon album. SARGATANAS recorded, “The Enlightenment” in 1996 which is one of the most important albums of this scene. Today, after more than twenty years re-released again on CD without undue and unnecessary upgrades. Twelve death metal hymns to the glory of the Lord of Darkness. More than an hour of music filled with blasphemy, hate, hell, sulfur. Death metal riffs mixed with crushing force of Doom Metal. Gods of Metal from Mexico debut album is a must have for fans of old-school. The standard edition on golden CD, all hand numbered copies.