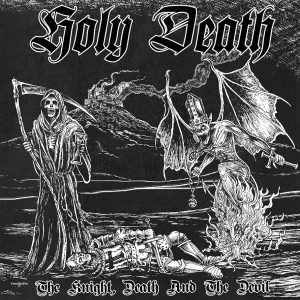 Polish Black Metal legend third album reissue on two CDs! The first CD is the original release from 2005 + six instrumental composition from this album in other versions. M. is responsible for mix of this part. The second CD contains an album + one cover + an industrial mix of one tracks. This version was intended for vinyl edition from 2008, which contained only 10 tracks. Goolary is responsible for mix of this part. Furthermore, has been added – a Sabbat cover the last recording under the Holy Death banner. “The Knight, Death and the Devil” reissue is a 32 devilish Black Metal compositions. It is 137 minutes of music dedicated for the glory of Lucifer. Cover by Christophe Moyen. Issued on two gold CDs.